For this race we assumed years – first we heard about it, that was; last year we did not fit term and, finally, this year was supposed to be objective, a second gear cycle Nordic Grand Prix Commune Katy Wroclawskie – kąckich trail lions.
Photo. Organizer 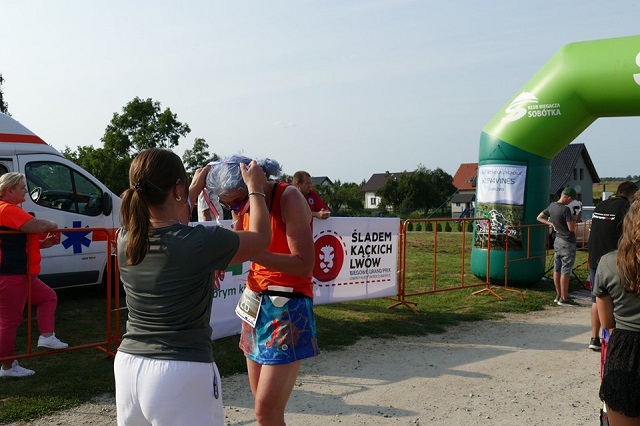 The course signed up in good faith, However, another race departure interfere with us 3 Over in the series, so they will be only two medals to submit.
we returned from run Oborygena at home we spent around an hour, walking the dog, yogurt instead of dinner and we went to jog again.
The competition office, start and finish were on the pitch and recreational areas, a lot of space, nice grass and shade. 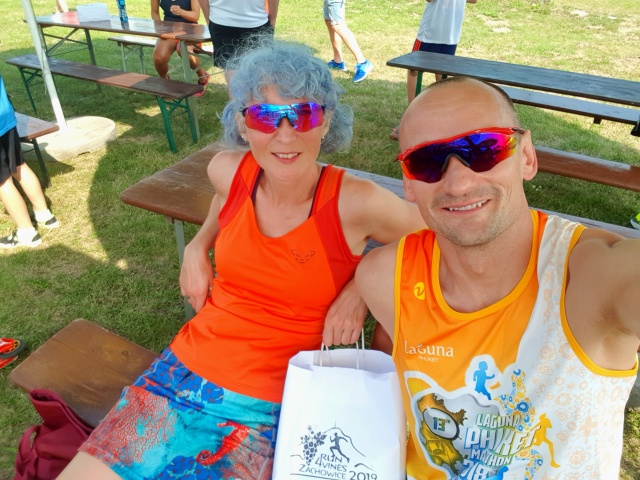 We have received a package with a postcard and surprising chłodziliśmy under umbrellas eating ice cream with prosecco. Atmosphere picnic, a lot of friends and wine 6 km-plus. 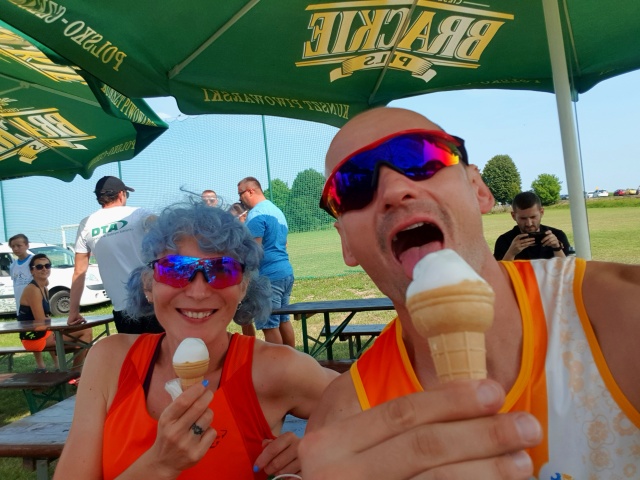 The two previous editions were intimate, present with record attendance and sold out packages already ceased to be a small local course. The queue for the packets 5 minutes before closing office occupations grew rather than diminished. Eventually it was decided to move the start, also reduced the official warm-up before the race.
We set up at the start and experience taught participate in local races, I stood at the beginning of – immediately after the first two lines of speeders. I suspected, it can be calculated gross time. I also do not want to push for a morning run.
Photo. ZmierzymyCzas.pl 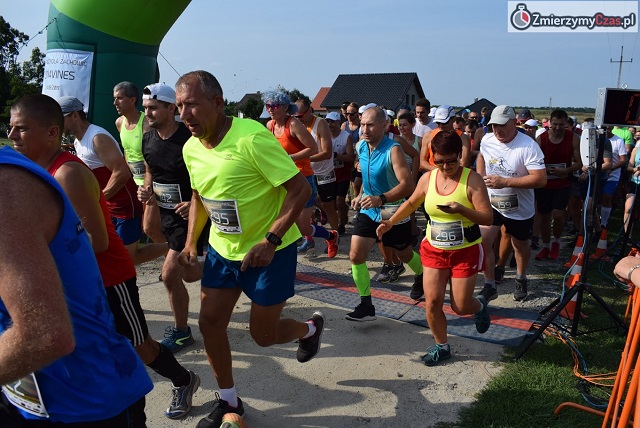 I did not know completely what to expect from each other or from running – how route. He dropped a shot, I ran as fast as he. On the street heat wave hit, definitely time 16 It is not good to race, especially in the summer on hot days. We ran through the vineyard, where the point was prepared with water and wine. He was surprised to notice, that no one before me did not reach for the wine, I also do not, I was a driver. The route was drawn through the streets of loop, dirt roads, gravel path – you could not be bored. Very troubled me heat, gasped as the locomotive for the first time in his life so often I glanced at the watch display – if left to finish. I ran it in the company of men and Przemek Wieśka, leaning, and together ahead of the pace of giving. About 1,5 km before the finish line just hate mail, 500 meters to the finish – I knew, that I have to run a little further. I wanted tighter zafiniszować, but I leaves only tried not to slow down. Meta. I ran as 3 kobieta.
Photo. ZmierzymyCzas.pl 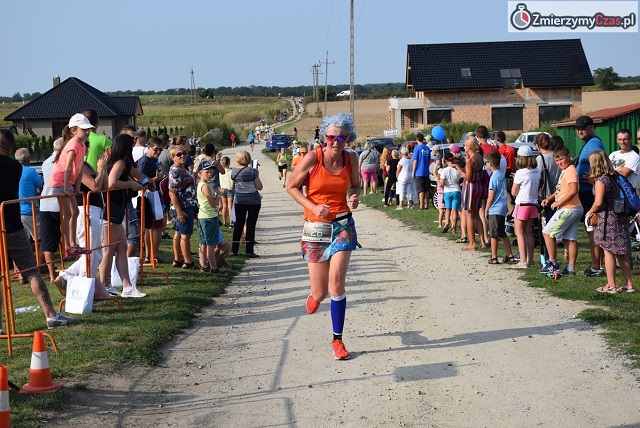 I was looking for water in the eyes of madness, He was in glass bottles. With shaking hands turned on the cap and went to graze on the grass.
Photo. ZmierzymyCzas.pl 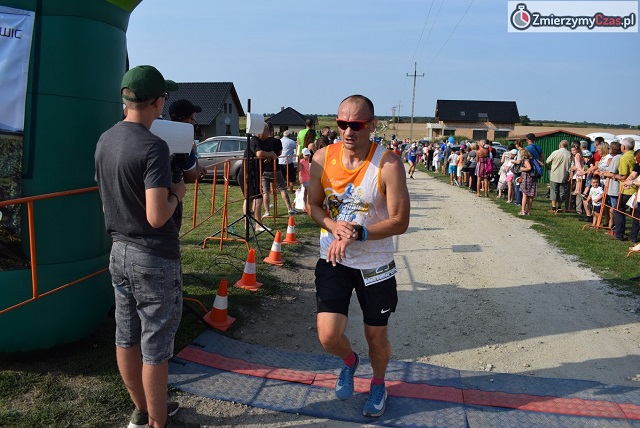 After 10 I organized minutes and returned to the world. Published results turned out to be, that I was 3 but at the time Gross (that was classified, moreover fit in the first 50 zawodników). 4 girl at the finish line ahead of me 8 Net second time! It is set up at the front.
Photo. Organizer 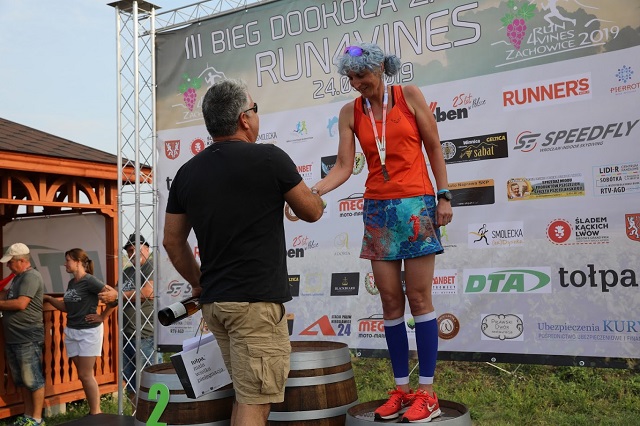 For decoration we had to wait quite a while, hungry and tired. Finally we waited and I was surprised prizes.
Photo. Organizer 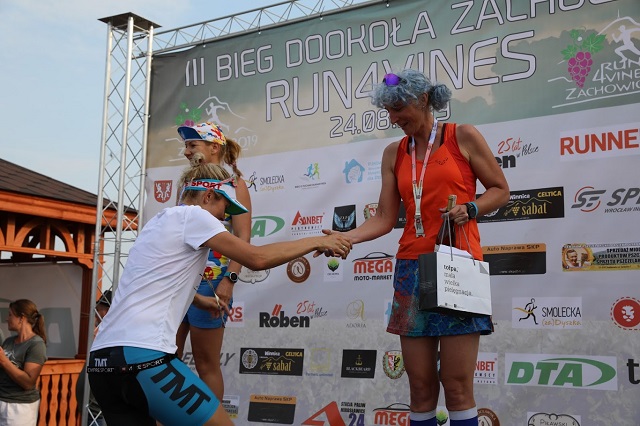 It was a very successful day, momentum returned home to eat and rest, then already in the house turned out to be, that we took too 3 in pairs! 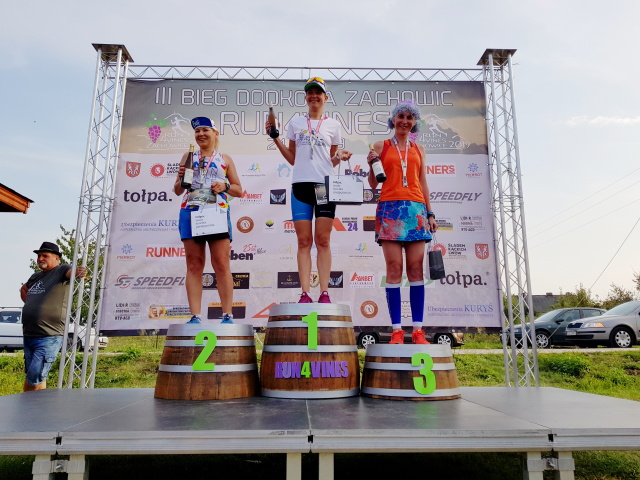 Run4Vines is local, Over the picnic and let it remain so! I am full of admiration for the organizers, because everything is well prepared, You see the enthusiasm and desire. However, the announcement frighten me to increase the limit 500 people. It's not fun run, you need a staff of people. This was clearly seen when receiving packets, place and can accommodate nearly 50% more players, but 3 kibelki definitely not the route will be far less friendly for such a crowd. At the finish it lacked water, see, the idea of ​​water in glass bottles not really works, especially in the heat. Baniak with water pouring probably would have served better. Cups were made of paper, even one he dragged to the finish, not to litter on the way.
Photo. ZmierzymyCzas.pl 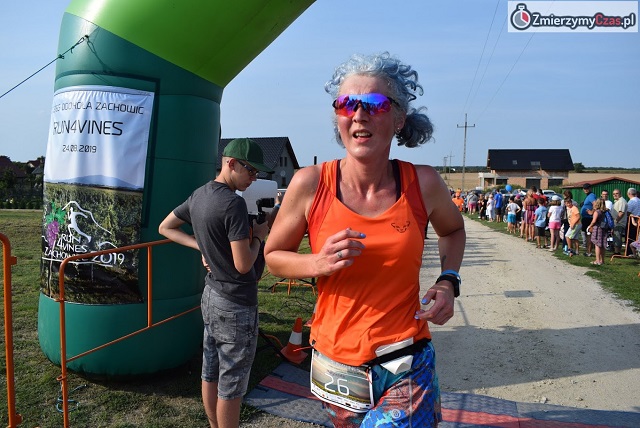