From the beginning, start RunKayakBike supposed to be fun. How else to treat crazy trio: 6 km run, 16 km cycling route and the motocross 3 km kayaking on the Prosna? 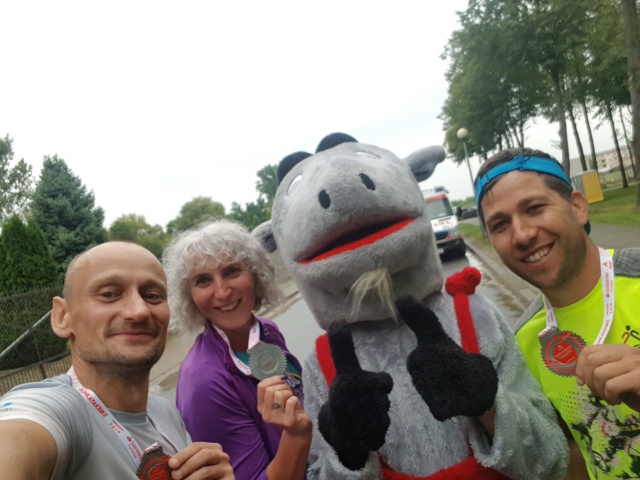 Start time is scheduled for 16, we had plenty of time to reach peaceful Wieruszowa, advantage was too dear, simple, two-lane. On the spot in the woods prepared office organizer and zone changes. We received starter packs, municipality and sponsors tried to: bidon, napój, baton, crisps, t-shirt, backpack and soup and sausage at the finish, water at will what more could you want. 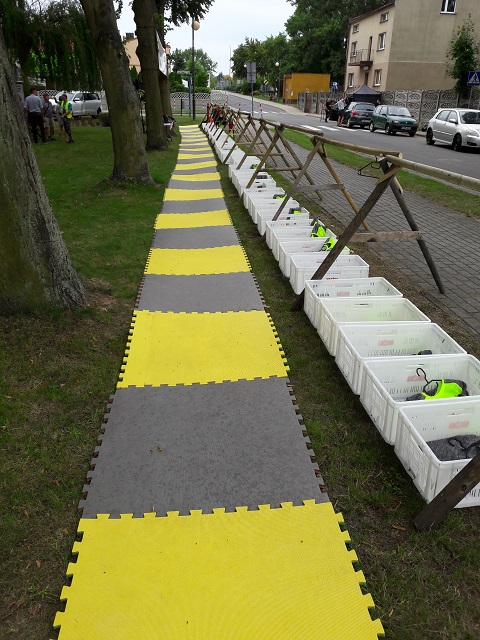 We extracted the bikes and cheerfully chatted with a neighbor, who parked the car next to. We learned, he rides a bike, but the canoe will flow for the first time in my life ... no good, But it is fun. 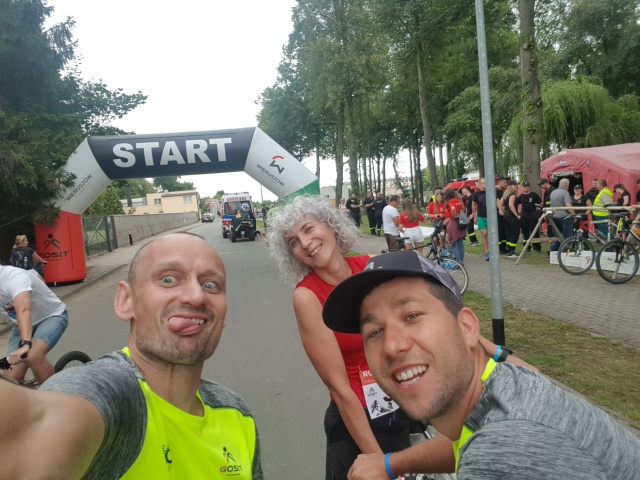 Bicycles had become caught up in the saddle in the zone changes. I had a problem with that, and when I struggled to pick up the frame came another player and helped me. He picked up the bike and found - heavy. The second stage of the competition was my headache. I knew, that I run well and catch up over, but on the bike – my white reto on narrow tires, I had big problems. 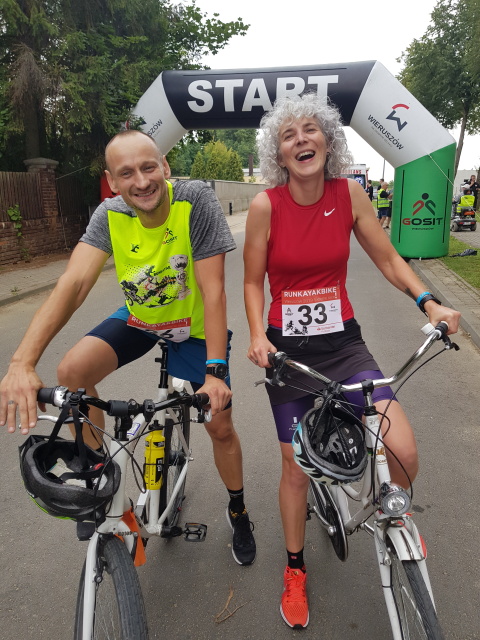 Before the start there was a mix, the formula was too innovative and no one knew how competition and changes will look like. I am full of admiration for the organizers, I undertake such a task and achieve them is a big challenge. All, however, managed to perfectly.
We set up at the start, I was horrified and I counted 6 kobiet, including me.
Wystartowaliśmy, at the beginning of 6 km run.
Photo. tugazeta 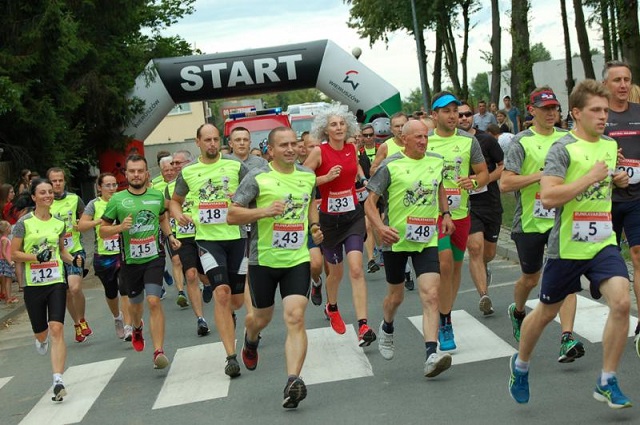 The tour was led dirt roads, nawierzchnia zmienna: asfalt, szuter, pavement, field path. We ran an average of pleasure was very hot and stuffy. I held her blankly and I ran to the transition zone as the first woman. I took the bike and I tried to put helmet on the run. Failed to, So I stopped, I put him and zipped, I ran and I got to take off on a bike.
Photo. Patricia 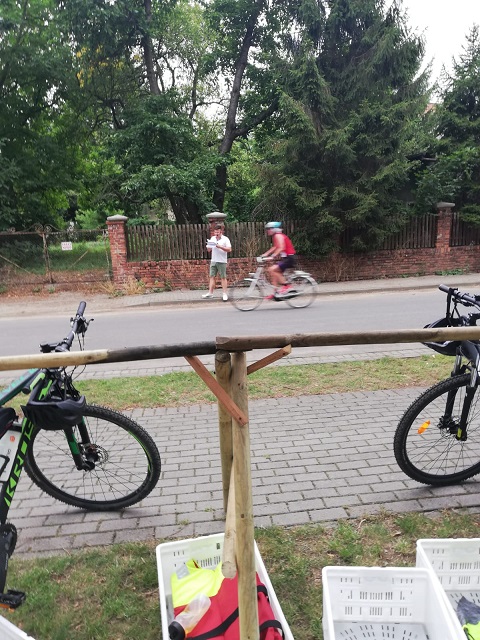 Now 16 motocross km route. It started with a piece of asphalt, then we drove into the field and began to. My narrow tires completely unsuitable for driving in the area. Loose sand caused, that the rear wheel is uślizgiwało, I fought not to upset. I waited while the girls ahead of me. I had only "bike postman". He ran as far as allowed. On the fields we drove into the woods and it was even worse. Hill overcame uncontested on the route with a bicycle, two more the same: the bike, confession, on the bike and "pipe". Forest fragment memories worst, It was the most sand and very uneven path, Fortunately, a length of about 500 m, if it would be more I do not know if I would give advice. We drove through the technical expressway, I could finally disperse, windy, but I was happy with the level surface. The sun no longer shone, it was cloudy. Then he fought with szutrem, sand and holes. Cycling on the roads it was such a huge challenge, driveways, górki, reunions, street in motion, pavement, concrete slabs – was all, as you can imagine. I overtook a few guys on their off-road bikes, I said with surprise, I'm still first among women. I pulled into the happy zone changes, that nowhere is not rolled my, the bike was, the inner tube is not broke and I was able to ride this crazy route.
Fot.Patrycja 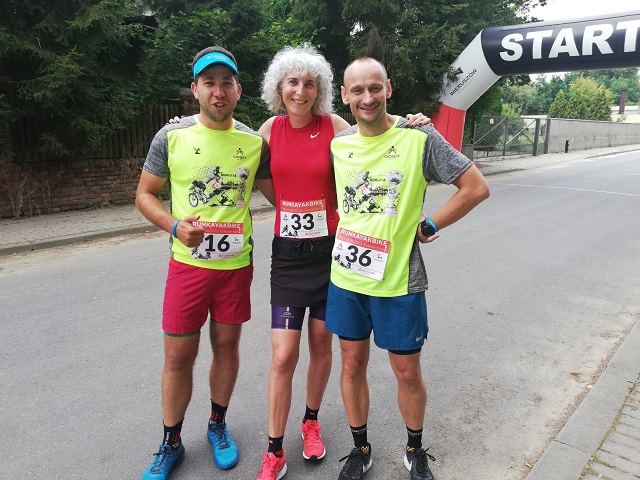 I tried to hang a bike but do not force it to drop off mail, the girl with the service rushed to help me but I said, I'm not going to push it, and only oprałam, I took a life jacket and raced to the start. I heard cries: helmet and I threw off his start on grass. I ran adapted marina on the last leg: 3km by kayak. I ran down to the water, the organizers were waiting with a canoe, I got in and started rowing accompanied by rain. We had to swim about recurrence 1,5 km. I rowed and rowed, without end. I overtook two guys, me no one ahead to the finish line. Impatient, I asked if coming from the opposite direction to relapse, Finally I saw him. He made little rushes, I turned and had to take to finish. The river narrowed fragments, Now I passed a large number of canoes. I cried route safety, że jestem 16 Open and first among women. The last kilometer and quickly overcame finally bridge - Meta and end. I was drenched, stunned and very happy. Gladly took advantage of the help offered when getting out of the kayak. I went to the substitution zone to give the vest and there in the basket when my number was waiting for me helmet. It's very nice, thank you. 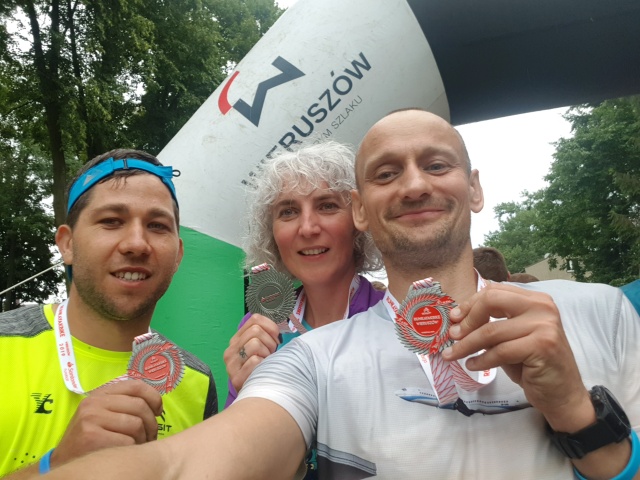 We changed things sodden, We packed our bikes and went to feast.
The organizers waited until everyone finish the race, penalty points added up, there were any ambiguity with cycling route and joined the closing ceremony and awards. Wszystkie 6 women have been awarded in the open. 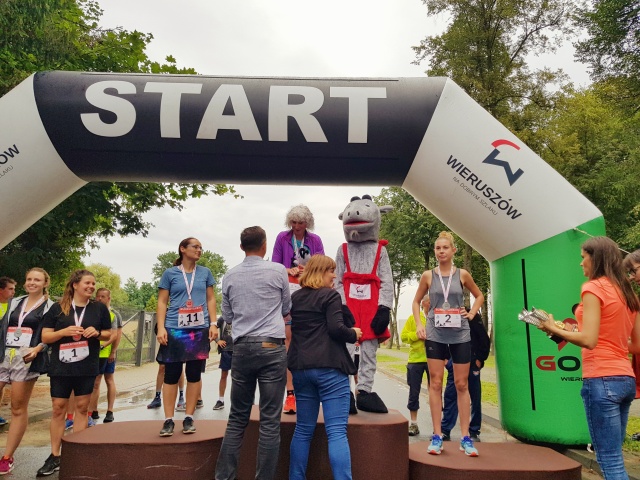 I am full of admiration for the organization to take such harsh competition. We had a delicious, three routes were marked and protected, Zone change is checked and all players have completed successfully struggles. I hope, that next year we will again be able to take up the challenge, although it is not so obvious. 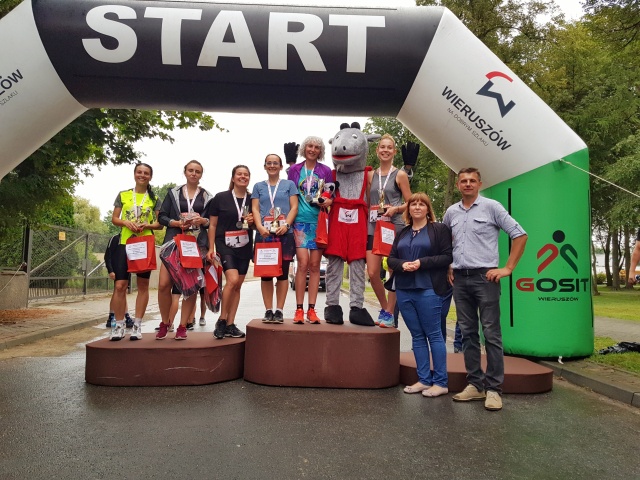 If the organizers decide to make an effort, we are compulsorily. I would recommend anyone marzącemu on professions tri 😉 struggles were a revelation in a kayak competitions, all perfect for a summer afternoon, distances chosen point. I will not cling to the organization, because I really have nothing to.
Zero Waste – packages were issued in paper bags. Each player got a bottle of water. The water was just in the zone changes in plastic cups, but it was not much and everything has been cleaned, on route no śmiecił.