Run in the Arctic and the land of the Midnight sun. Norway, fjords and the course played during the polar day. 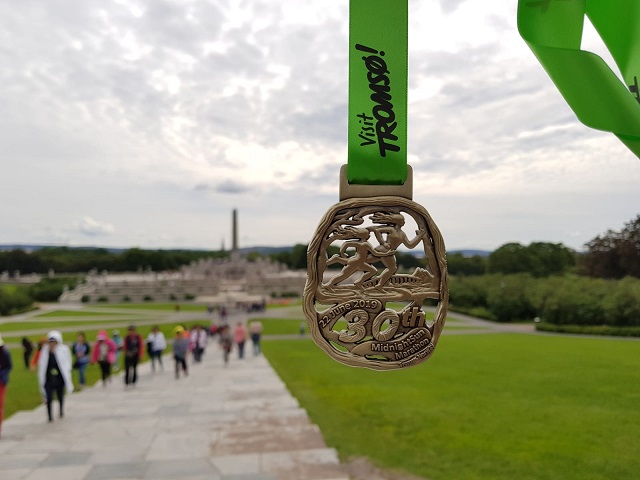 I knew, that these 42 used to be my, positive feedback only cheered me to the realignment plans.

Run starts at 20.30 but you do not have to worry about the sun, It simply Tromsø at this time there is no. All the time it is light is equally about 2 at night you can meet the locals painted houses, walking, gulls fighting over the loot and loud screech, teeming with life.
Photo. Zoltan All 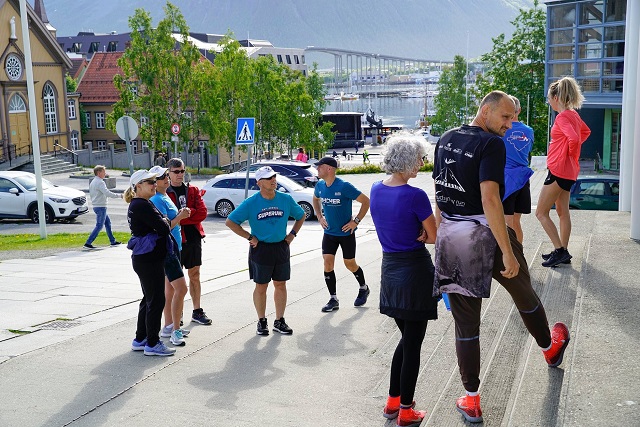 I always say, that racing played in the afternoon and evening are much more difficult. You have to wait all day to start, be careful what one eats, and above all thinks, even all that in front of you and not to relax after the race. In this case, time was not a predominant criterion. Polar day effectively disturbed circadian rhythm, and all the time I had the impression, that is 15 hour (so late due to clouds). 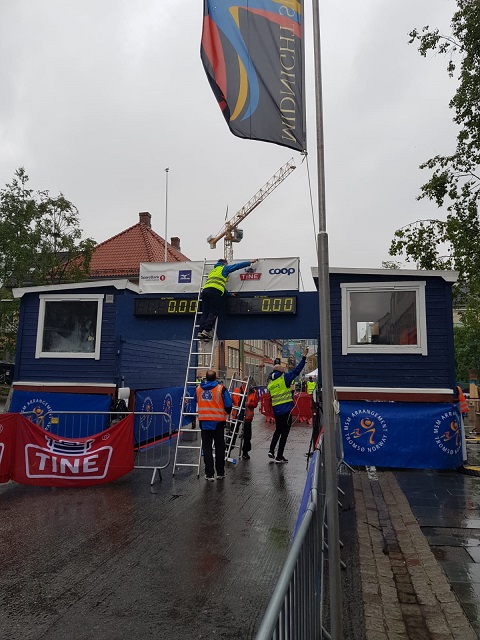 Boredom expectations also managed to overcome, the worst was the weather, and what carried with him - rain.
Never before has so far so late we did not leave the hotel on the course, just half an hour before the start, but we never had such lodgings close to the finish line, and start receiving packages. We ran a little over 500 meters so that as little as possible to get wet. Inadvertently checked whether the NRC foil, which always we carry with him a backpack. During the last escapades we used it and I do not I added the lack of. We were "goals", cold and wet. We reached to City Hall, where runners milled about, their way too cold and wet finiszerzy 10K, was gwarnie, crowded and stuffy. 15 He began minutes before the official warm-up and we walked out of the building to acclimatize.
Photo. Zoltan All 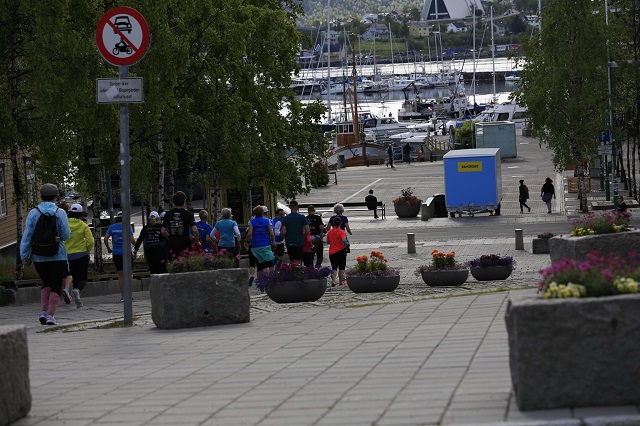 The temperature hovered at 8 degrees Celsius and luckily for us the rain stopped. And start the countdown. Zakrętasami first kilometers ran through the city center, potem wbiegaliśmy na most i dalej koło Kościóła Tromsdalen około 20 km on the mainland side of Tromsø. The joy caused by lack of rain did not last long, to 4 km it started to drizzle, rain and pour passing all possible combinations until the finish. Definitely spoiled reception is run. The views were obscured by clouds, There was dullness and cold. While the weather was not a surprise, because such forecasts and were already so-called force majeure remained the whole organization run, protection route we are very surprised and disappointed. And just as the whole culture associated with the marathon was extremely nice and interesting prepared, runner could feel "pampered" is the same gear (pomijam aspekt 30-tej rocznicy) – not just… Maybe here it speaks a strange perception of the world FOR IN Norwegians, I do not know, ja byłam rozczarowana.
Photo. Zoltan All 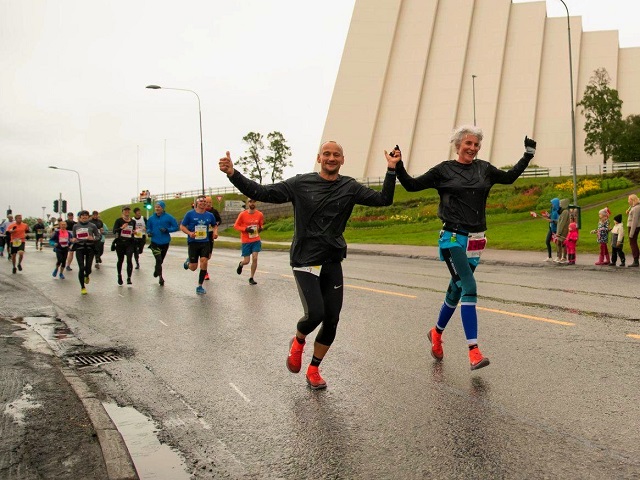 The biggest drawback was ironically route, route and route again. In fact it ran two sections of the 10 km, return the same route – łącznie 20 km. The potential of the city completely not used. The route led mostly sidewalks and bike paths, here and there narrow and unpleasantly. Fragments of public roads under the loose movement. As I mentioned, It means the city does not sleep, and between 22 a 24 time was busy. And there is nothing more pleasant than a passing next to you at the speed of a large tank or truck, that will not like to put it culturally, bad weather you water from under the wheels. This makes the weak and protection in the critical parts of the road non existent, roared cars on the road running, nay even the buses ran and pushed from the runners. I was in shock, and here I bow my head before the Wroclaw Night Half Marathon (to porównanie nasunęło mi się tak naturalnie, choć nadal nie lubię tego biegu). 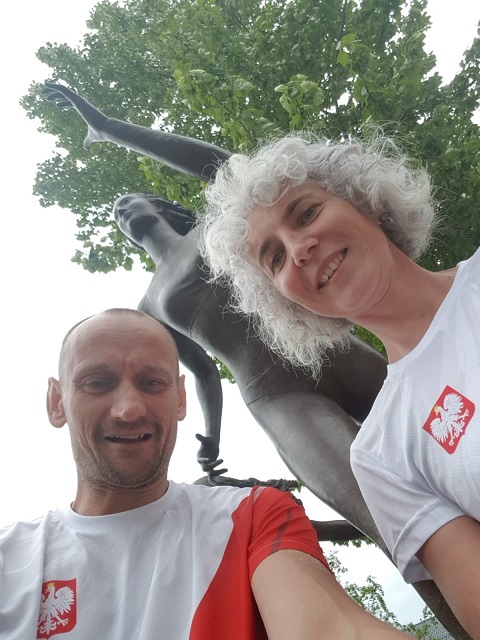 Surface quality also leaves much to be desired, rut with water and holes in roads, loose gravel. At the end of the same route once set half, where the headland was already a large accumulation. I did not know whether to sympathize more cutting edge halves, who had to overtake us with marathoners 25 km in the legs or us. There is not picking, only to inform – because it is a standard practice in mass races.
It was not flat at all, ascent, runaway and so all the time, up and down, top.
The route was a lot of fans, całe rodziny z dziećmi, oczywiście najwięcej w pobliżu startu/mety. I admire and thank you, night stand (ekh) such weather! We tried to brave kids nailing Fridays.
Points of the water were at 5 km, był też izotonik, quantity was sufficient. Volunteers were serving cups, which was a nice gesture. In addition, banana pieces were and took advantage of them on the last two points.
Photo. Zoltan All 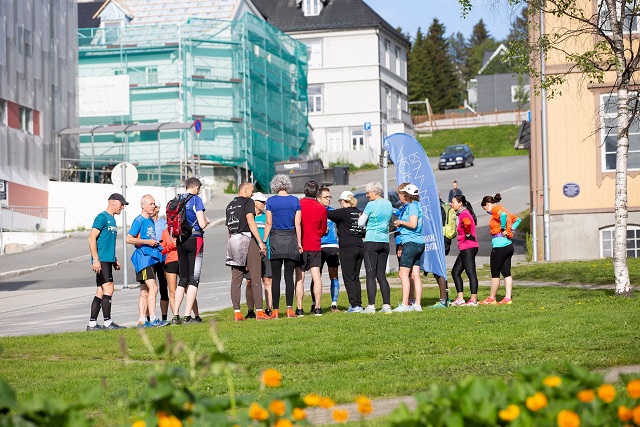 At the finish line there was a mix of thermal foil reception, frozen, outstretched hands was more than trailing administered to volunteers. Next on the square, tents distributed warm drink, wodę, isotonic, alcohol free beer, pieces of bananas and blueberries boxes.
We grabbed the film and shaking like jelly, barking teeth doczłapaliśmy hotel.
Time - I think good, byłam 10 in his age category. Half the distance we ran a really good time. traditionally, 30 km I had no walls, but the last 10 km I ran was much worse. It was only on the ascent 4 km before the finish line struck me, again on 40 caused km, they do not plan to go back to Tromso. For such a short distance we lost a lot. 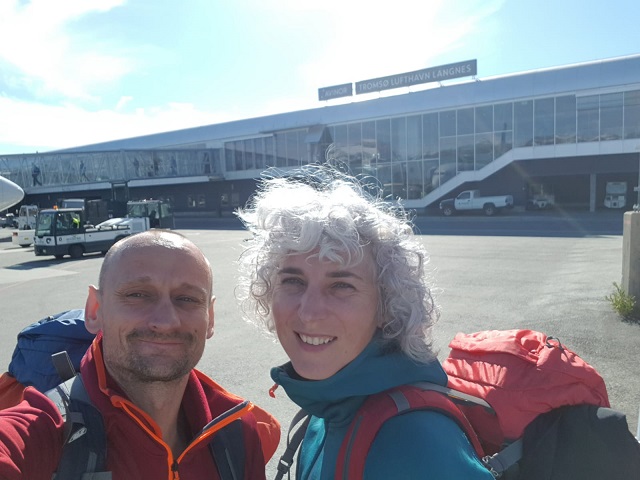 Jestem zadowolona, I consider successful marathon, However, in our small ranking is not high - surrounds the rear together with Jamaica, Norway and embarrassing to expect something better. Maybe we expected too much, because anniversary, because all such enthusiastic ... certainly took a lot of receiving rain, route may not be so bad if the sun was shining, skupiałabym can so this, what on the horizon and not underfoot.
Midnight Sun Marathon polecam, because it is an interesting experience but the choice should be aware of – not uncritical, given the costs. It was worth it for the views, people and atmosphere, additional attractions, the entire areola. You could see a huge commitment of residents and local groups running. 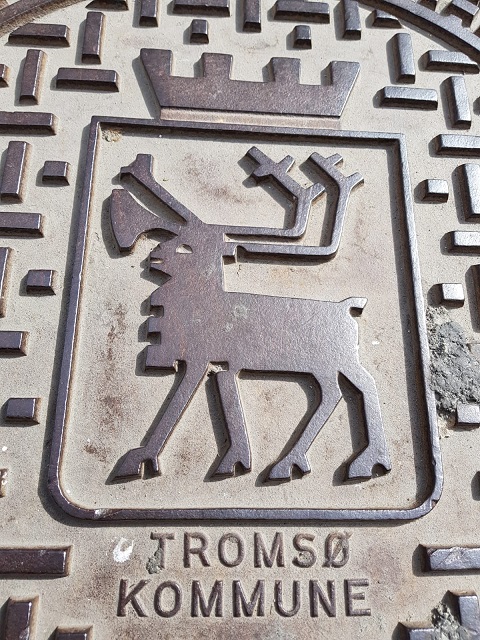 And at the end, to the airport – około 3 km, we walked the route run. On the street, shoulders and sidewalk was littered with cups here and there (paper for iso, Plastic Water), gels and other junk, a lot of places (sic!) “together” the garbage. oh rude, not nice.