This is Africa – Mini Classic race
Created by: Goshia

We flew full of optimism, we did not expect what was waiting on the spot. With the aircraft approaching for landing in Dar es Salaam we saw a sea of ​​green, palm trees and finally part of the city with the ubiquitous corrugated iron. 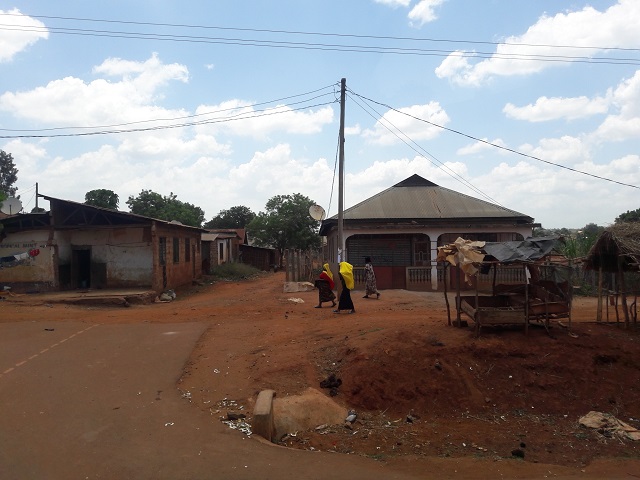 Then it was just worse. After leaving the terminal we hit a heat wave of unprecedented strength, nowhere else it was so dry, hot and urgently. Wiedzieliśmy, that the planned 11 km march to the hotel in the heat of the backpacks will be impossible. 35 US Dollars for a taxi for us was "backpackers" far too much. Los us smiled and teenage boy, motorku tricycle driver just blew up a passenger at the airport, we asked the hostel to go and for how much. Stargowałam dolara, accordance with the applicable tradition and the 15 moved bucks. I knew, that is a good price and I wanted, so also earned a boy, why not make more money slain. 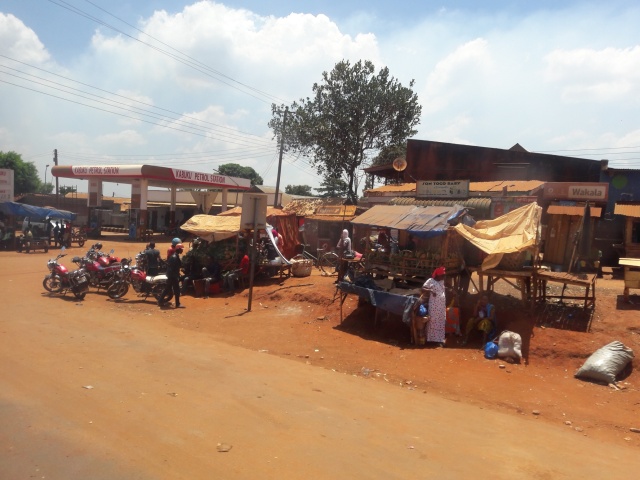 We looked fascinated by the new country. We have seen – otherwise, stranger, wildly. It is teeming with life on the streets, women in colorful dresses fantastically transported on the head packets, kanistry, banany. Before my eyes I travel a live video. Tłok, stoppers, stalls, more house with a corrugated iron, buzz. And suddenly he saw the boy, We follow the route on the phone to the hostel. Politely asked to leave your phone, because we can break it. But as I thought - from a moving vehicle? the spell was broken. 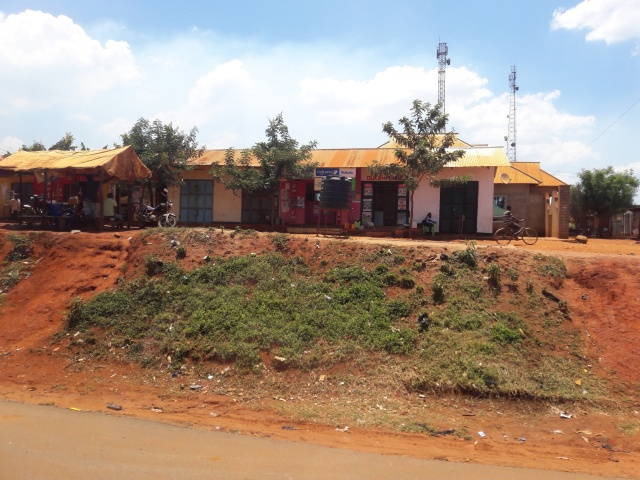 Stoppers were huge lawirowaliśmy, We sold out, wpychaliśmy and I knew, with our "motorek" it was the best possible choices. We pulled in slums, moreover the whole city, buildings looked like after hostilities, I thought, that was wrong countries, Yet this is not Somalia. ruins, hovel, rynsztok, garbage and earth roads so full of holes, that basically was the same hole in the hole. We arrived, surroundings very average. Abashed we walked into the reception, everything was ready, including tickets for the bus to Moshi. The receptionist was nice and helpful, surly owner and only deepened our "psychosis" foreign place. In addition to the door of the room he hung a plaque with an extremely friendly content. Do not leave anything of value in your room, mind your own passport, It is the most important page of visa, Do not wear jewelry on the street, phone, camera and most importantly - how you attack is not a weapon, give all life is important. And such plates wrapped in foil or paper with a similar content have seen / we received anywhere, where we were staying. This is Africa. 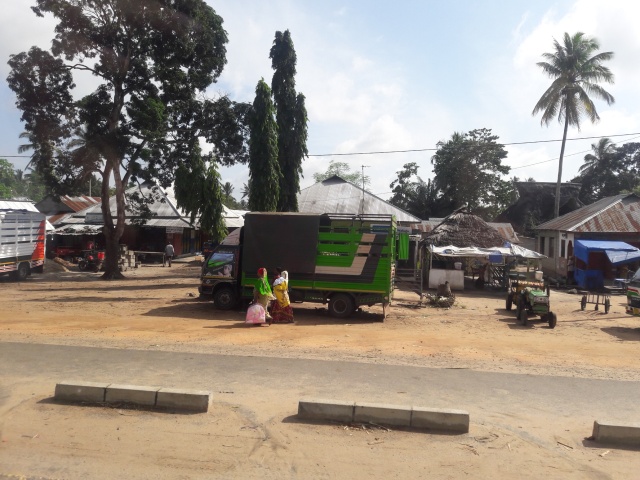 Bezpieczeństwo. The difference between the atmosphere was evident in Jamaica. There, at every step we were told, do not be afraid, You are important to us, we protect tourists, because thanks to you earn. Here in Tanzania that whites were the target. Najzabawniejsze, lokalsi that went with phones. My “we celebrated white” from a distance so we did not do in the cities of photos, We not lined up your phone or camera with a backpack. 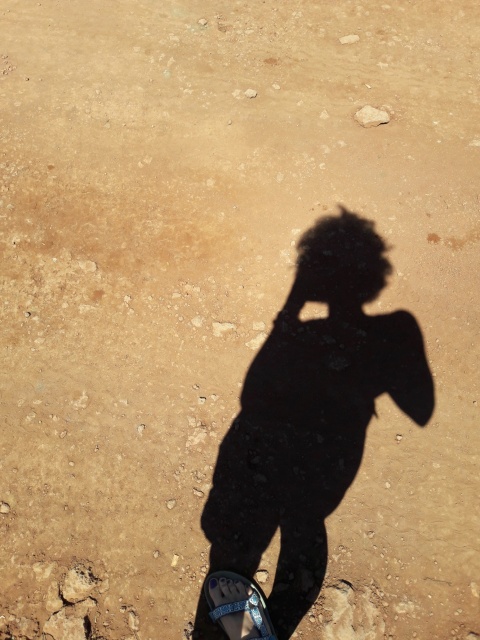 I felt safe only on safaris and beaches of Zanzibar, when as the eye could see there was no one. Maybe we had too much fright, but it did not help calming pictures eg. z Moshi, where we saw schools, Christian schools with a high wall and potłuczonymi bottles on top. Our lodgings in Moshi also had a great wall and a steel gate. We stayed in the second building, also fenced wall with a steel gate, at the front door to the building was a trellis, double doors and the security guard escorted us always from one gate to another. In a similar Michamwe – high fence, closed gate, even the gate was bolted to the beach. How can you feel safe… Besides, any type of centers “all” also were high walls, often with barbed wire or wire under tension. This is Africa.
Room to room, African, one night about. We chose the place budget, also anywhere in Tanzania we did not have air conditioning, only fan. 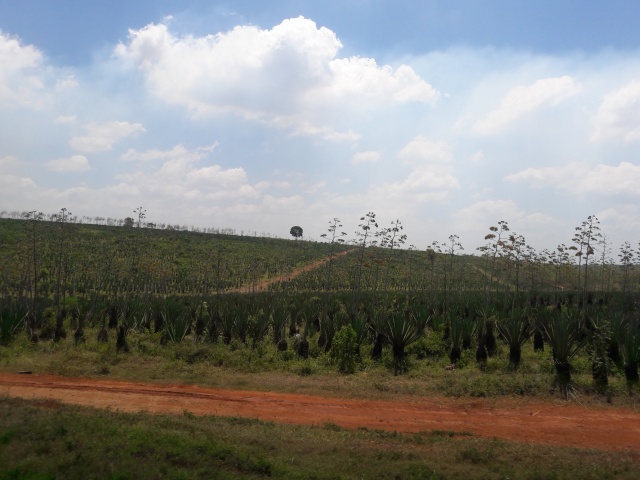 We left the hostel in search of a pub / restaurant. Quick tour of the area and we already knew, it is not Thailand, and eating on the street do not we use. We were the only white people on the street. We walked along the gutter to the main street and watching the locals were able to overcome the main artery of the city on foot, we got to the shop, something like Supersam, where you can pay by credit card, he was also an ATM. food prices – nooo not cheap. We bought our dinner, breakfast and lunch on 11 hour trip. And fast, before dark we returned to the hostel, because the streets are not lit. She waited a surprise - the doors were sore, although Maciek closed it and additionally it checked. Fortunately nothing was taken. 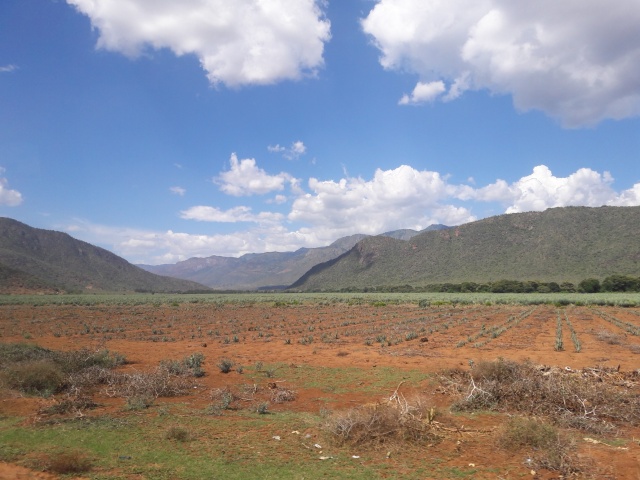 Long before the dawn, watching pictures of the city, that never sleeps, or sleeping side by side wherever and whenever we went to the bus stop. We traveled long-distance bus with lokalsami, us rode one white. We decided on this breakneck journey to a closer look at Africa. Do not disappoint us. We saw life, no tourist postcard. We passed villages, school, agave plantations, we saw a burning savannah, Maasai village. 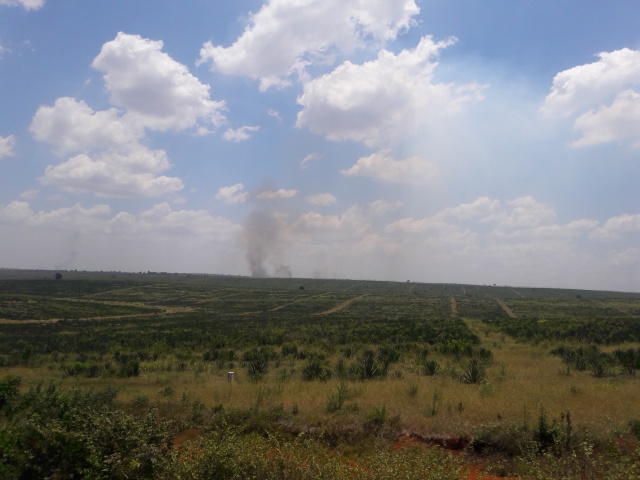 And even though they live in a hut made of sticks and a pile of cow, that they have cell phones. Apparently they drink only water and blood, and saw them with beer, or even two. They live in harmony with nature and its rhythms and despite, that strolled among the wildebeest, giraffes and zebras are on hand each a watch. Civilization reached even to the Maasai. And in the matter of explanation - the famous plaid scarves they wear, Kenya reportedly buying the goats and cows, They are manufactured in India, to 100% wool. As this is not the hot, I have no idea. Anyway, all "sorts of" Beauty and scarves, which are offered in Tanzania is "offal" for tourists. 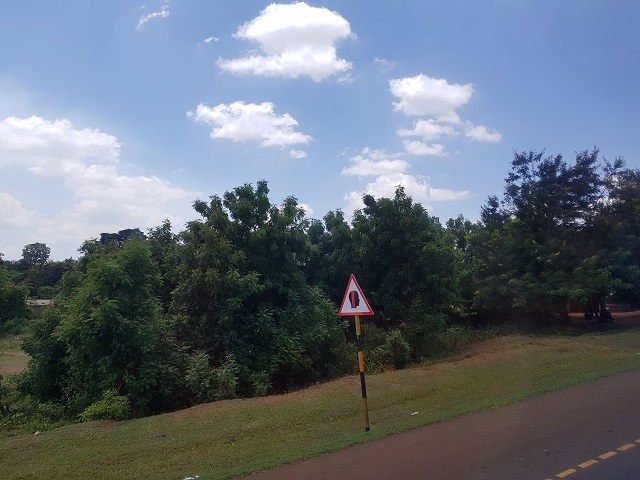 Captivated me for materials, and patterns worn by women in Tanzania. Dresses have characteristic puffed sleeves, to that of the same material sewn on head scarves and shawls in which children wear, younger girls wear the same dress as the mother of the same pattern. It looks beautiful. The material is thick, What surprised me again, but dries rigid literally 5 minutes. Zanzibar women do not face the street without a hat, long sleeves, pants and a dress. We also saw a full occultation, all in black - honestly I do not know how to stand up to such a temperature. 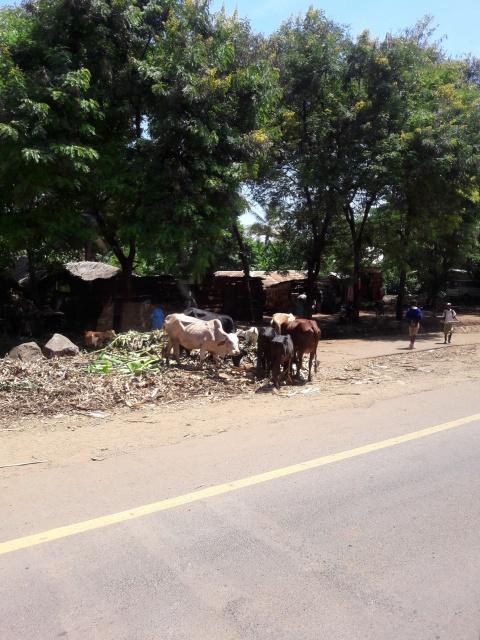 Kitchen. We had one stop for lunch, where a young Tanzanian helped us buy a "national dish" chicken frits. In Tanzania, there is nothing exotic and "interesting" to eat. On the streets govern as big as a finger fries and chicken, that tastes like wildfowl. The meat is lean and dark, no gram of fat. Of course you can regale a pizza, burgerem i spaghetti, but probably not when it is going to Africa. Fruit is low – apples, pears, mango, oranges look like vile psiury. Watermelons are oblong, no big deal, like coconuts. 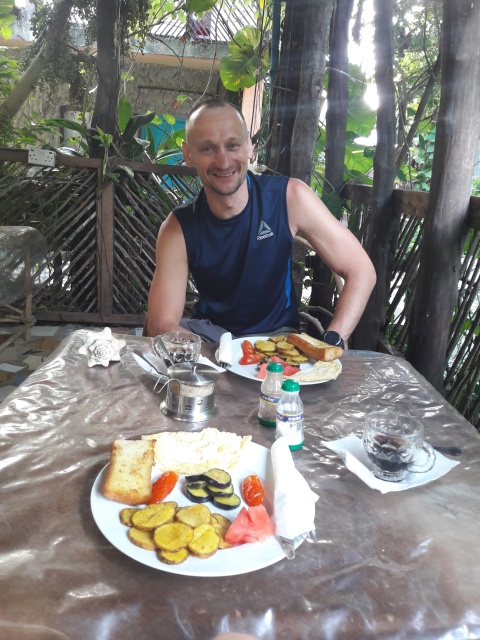 Bananas are small and squat, and their taste is the best in the world. Yes bananas taste! We tried a roasted corn on the grill, which sold baby on every corner. Was delicious, completely different in taste from our. Also we were treated to local specialties, all deep-fried in oil form ala our donuts, samosów in the middle of Kozin, or minced meat balls mashed potato. Pride. We indulged in a more exquisite dishes in restaurants in Zanzibar our night shelter. 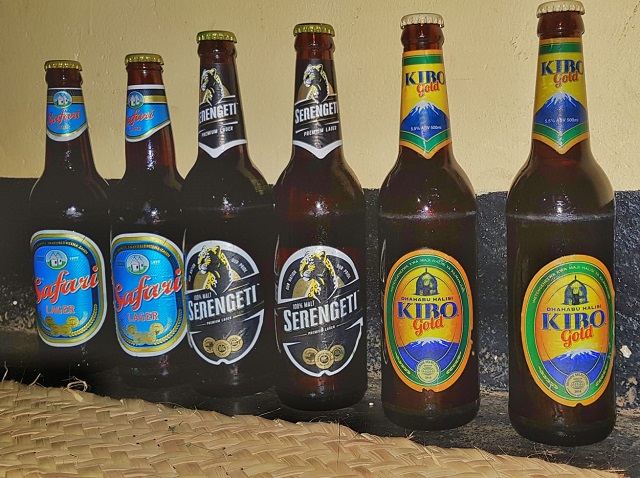 We also tried different beers, at first it seemed strange taste. After a confrontation with our native great beer underestimated, craft beer flavor Tanzanian. During the marathon we ran the brewery Serengeti, initially I thought, it is a prison. Large, high wall, steel gate and the guards with a long gun, Maciek made me realize, that's brewery. There is also a beer banana, weighted in homes, However, we could not try it, because it is a scarce commodity. Kosztowaliśmy banana wine and frankly I do not recommend. 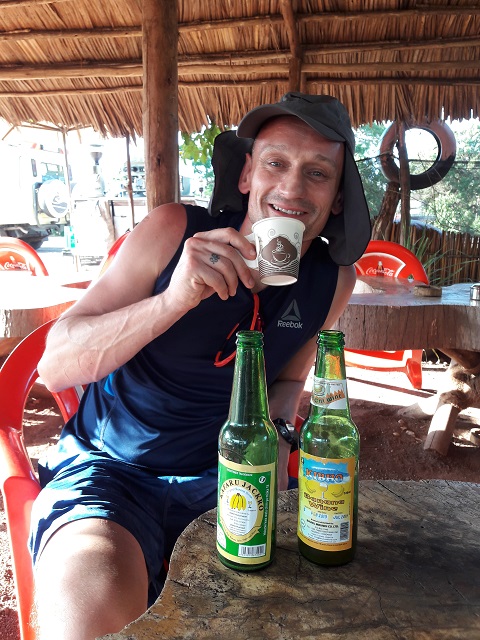 The food tastes differently, feel, it is not industrial, breeding of the tape and artificial production. All flavors are clear, other, natural. 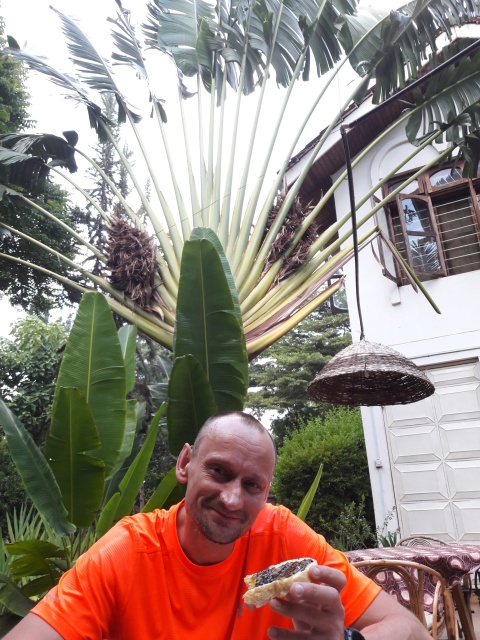 In Moshi we could look at the life of the city, We were in the center of the local stalls, where we met a lot of “my frendów” the shop with her mom. White was still very little. We walked, because of the position of the pavement (which of course was not) best seen life. We even went to the biggest market - 6 km one way, we passed on the way colonial villas (Of course walled) with its own protection, who waved a friendly letter (and perhaps he is knocking his forehead?). All vehicles, people heading toward the square, when they approached him, so the distance 200 m, We passed fancy. We have not seen a larger slum, we had all the documents, money and phones with you and does not give us 5 minutes to survive this tumult. With tail between my legs czmychnęliśmy in safer areas. 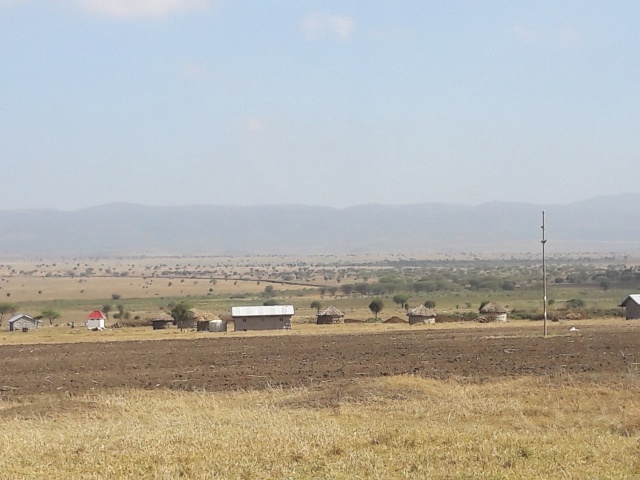 Poverty. Is everywhere, clear and shocking. TV is the most common one in the village, Men crowds gather in the sanctuary - where the most commonly watch the match. Of course, in any of the places where we were staying in the room there was no TV, but a waste of time on TV in Africa. Houses in the majority do not match even our worst altankom plots, corrugated sheet rules (Maasai housing is another matter). Life goes on outside of that thing, women wash, cook (gas cylinders / charcoal grates) not only penetrate, go where the need for. 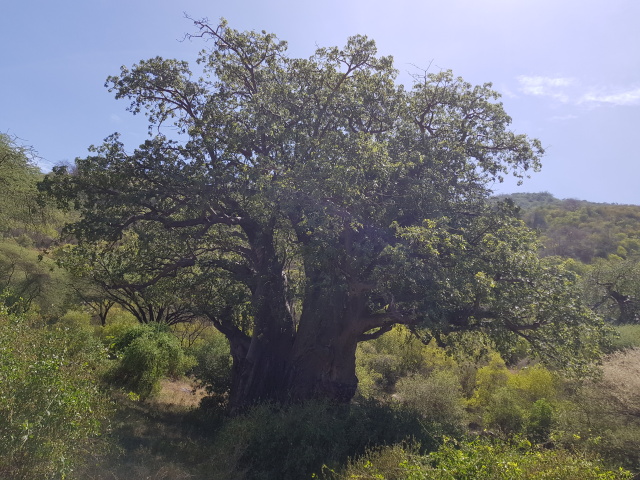 Children go to school in the morning and saw uniforms, at night when the temperature drops to 27 as they marched in sweaters, no horrible chill. They play football on the pitch, the pitted dirt floor (blades of grass nowhere to be seen) the divine. The ball is often made of jute bags associated with string, as in our European sense of this glorious years has had a. I also saw a teenager walking with friends at the playground, who had shoes, and basically the same sole, consumed as much, more holes than the uppers, indefinite color but I saw this misery sign skates. Smaller kids with great joy roll in front of steel hoops (I think part of the car) pushing them with a stick - pictures like Europe before the war, but I'm not sure if I or II. 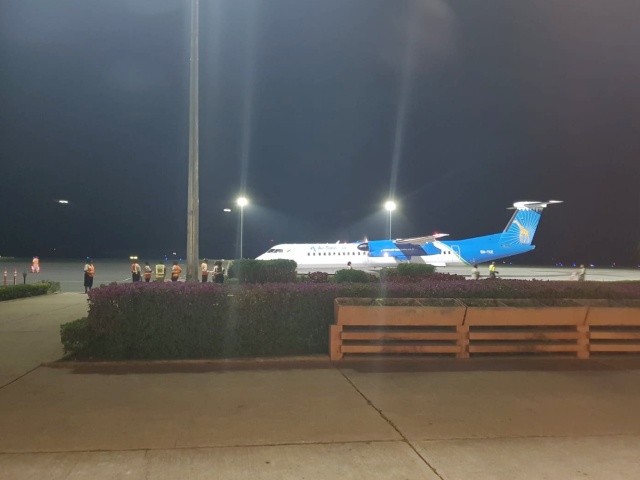 And unfortunately, the whole picture of the Third World, nadal, imaged folders travel agencies: Color Africa, resorts and beach that is part of the third – We fly to Zanzibar.