Thanks to the unexpected proposal cottage owner could not afford a long sleep. Rather than count on an extra hour access and a wake-up call for crazy 2 w nocy, we could only get up at 3. We have prepared a traditional breakfast runner: coffee and toast with jam. We put the evening prepared "starter kit" and went to a meeting of adventure. 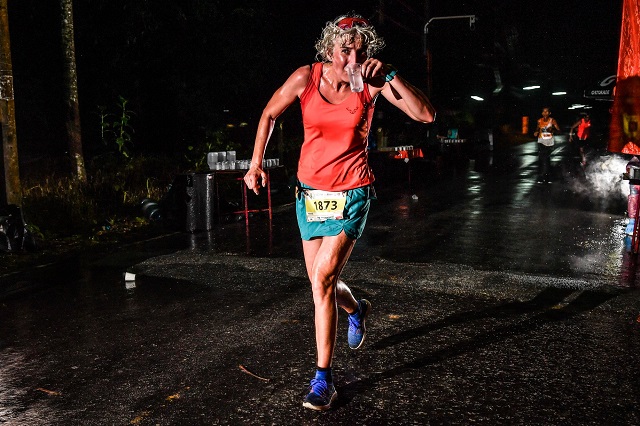 We got out of the car a bit earlier, I blocked the direct access service. A few hundred meters walk did us good. The crowd thickened, This was the first so-numerous "exotic" marathon: 2101 total marathoners, I was shocked by the amount of women – 491 and in my category – 131, this traditionally played "half". Definitely numerically dominated by Asians but not Thais. There was a lot of Europeans, the most numerous British, Poles were not able to meet the experts do not know if.

While the warmed, air temperature 26 degrees of damage to expend energy to warm up the muscles. The air was heavy in addition, because it looked like rain. We entered the zone and set the start at the beginning, I did not want to waste unnecessarily force the pace oversold and jerk. A crowd of people at the start foreshadowed the piston and the narrow streets of Laguna Phuket hardly conducive to "discharge" congestion.
There were no speeches, He flew drones and military kibicerskimi trumpets gave the signal to start. We ran into the darkness. The streets were quite dimly lit, moments lamps was not at all. I looked, I wanted to see as much as possible. Three blocks away it started to rain, to change in a downpour. We were all soaked. 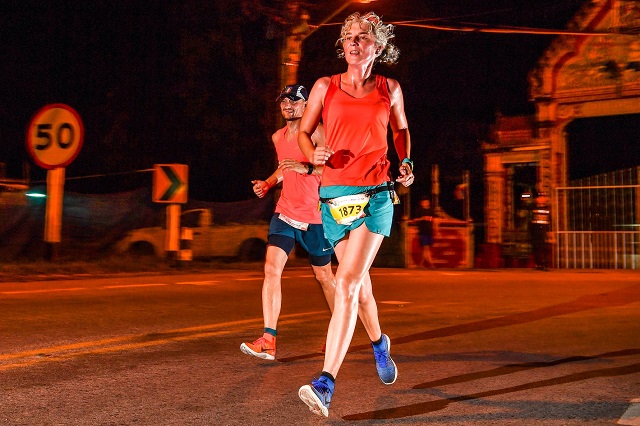 Traditionally, on the racing water in the tropics it is at 2 -3 km. There was similar, at the beginning of the first point of the water appeared only on 4-5 km but it was enough, further they were already very densely spaced tables and water on them, the isotonic, sponges, something. Co 5 km was a buffet and fruit - watermelons, banany, there were coconuts and even ice cream with frozen coli, żele. Everything stops. Guided by the experience gained in this type of racing know, that water should be used for each point, although sip - two. Gels are preparing for a marathon 4, for every one hour, We do not use gels organizer, but willing to take bananas and watermelons. At points not stop, This is very important, run – only not stand, because then it is very hard to move. 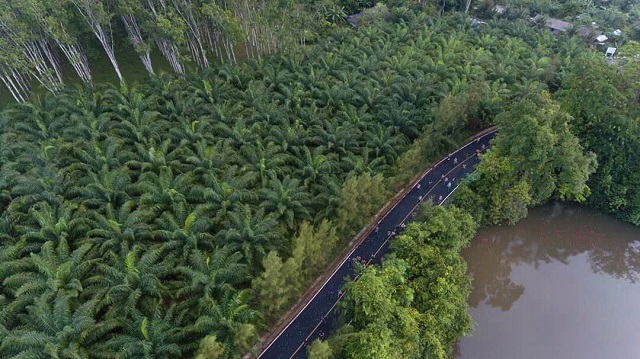 I ran well, I tried in spite of the generally accepted principles of the first half to run as soon as possible (within reason, so as not to cut off me for the next kilometers), night to beat as many kilometers. When the sun and the temperature will rise after the race, will fight as long to reach the finish. Such marathons are governed by different rules and need to know and accept them.

Little rain bother me, particularly wet shoes doskwierały, for which I paid a big impression on the big toe and the next two smaller toes. Biegłam. I was surprised because the route was not flat, podbiegi hills and gave a little bone. Finally it stopped raining but also started to do is light. Half were behind me, Maciek traditionally wheel 10 km does not run with me, everyone fought your way. Circle 30 km decided on bananas and watermelons. For me, well just check the last kilometers. 10 km to the finish – the sun was already ticking and I disturb, przy 7 km I could not wait to finish. In the end, it appeared a familiar hotel with a pasta party and the last meters to the finish line. Koniec. 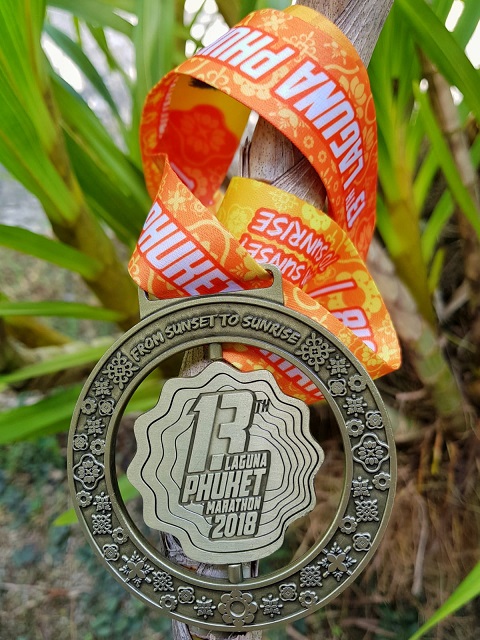 The tour was led through the streets of, asphalt, was just maybe 3 km portion of the park with mud and puddles. interesting views, street, temples, ocean, beach, rubber and coconut plantation. There were several relapses, I saw that I was in the lead, I am counting women in front of me and there were only 3. Right after the start at approximately 3 km has already established the order and so it was to the finish, there were no attacks on my place, nor I chased. I ran your pace so long as my legs were carrying. 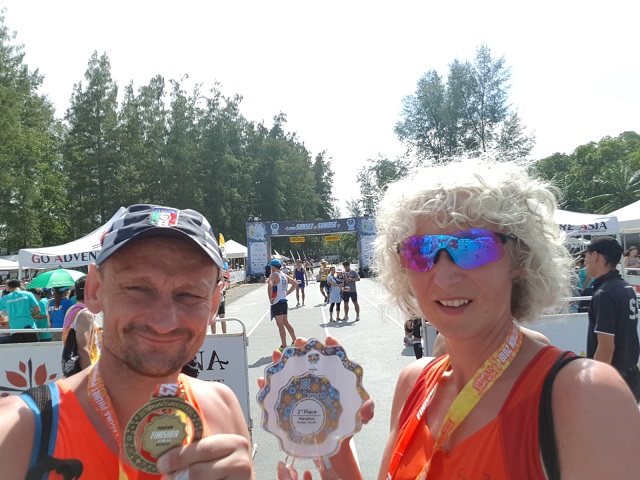 I got a medal for finishing line, I had to go to the next town, which was divided into zones: medical, massages, nutritional and finisher. In the area of ​​nutrition was water, the isotonic, hot meals to choose from, fruit and coconut ice cream! From there I used massage, although there was no queue. I went to pick up finisher shirt and waited for Maciek. 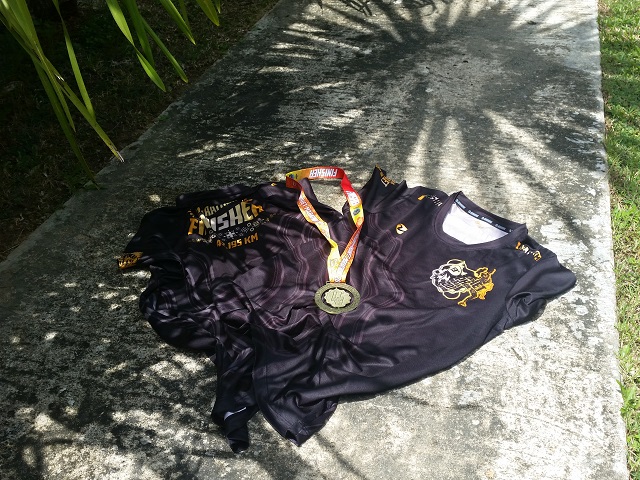 At the end it turned out, that is to receive the award must show a passport, which of course I did not have with me. Maciek brave went to the hotel and brought it to me. I picked up a trophy, pokręciliśmy little about the town and 12 time we got back to the cottage. 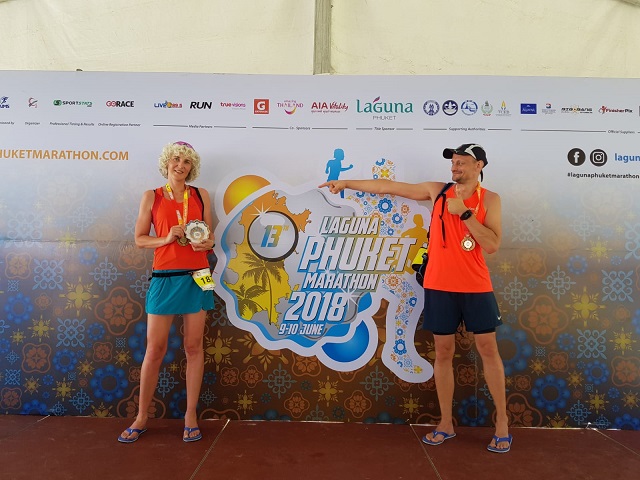 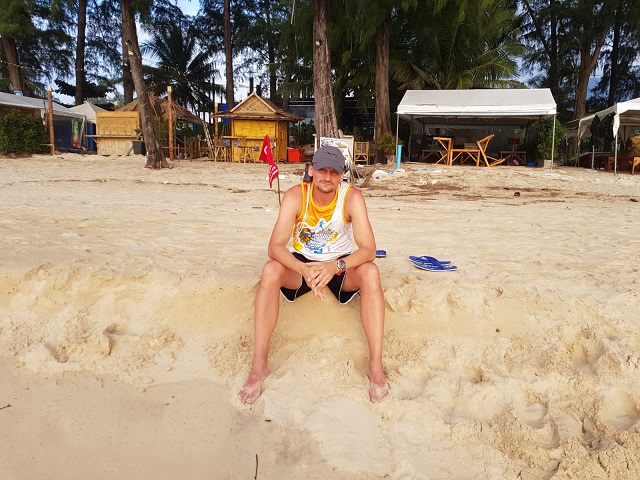